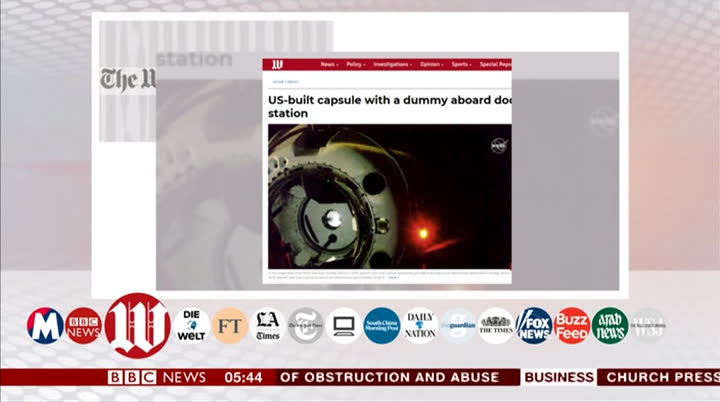 good morning. the trip this summer. welcome to breakfast, with naga munchetty and louise minchin. 0ur headlines today: a £1.6 billion fund to help the uk's and finally the south stuggling towns after brexit. china morning post — labour says the prime minister is trying to bribe mp5 it explains how to back her deal to leave the eu. the danish toymaker lego is planning a massive expansion in china. after two teenagers in separate cities are stabbed to death, the home secretary calls an urgent meeting of chief constables to tackle knife crime. more on that to come. fierce tornadoes strike the american states of alabama and georgia, it has had a massive expansion in my killing at least 23 people. many more are missing. home, there is lego everywhere. with me in the studio is joseph sternberg — columnist with the wall streetjournal. a you are lego fan? not when i step today i'm talking about personal finances. more of us are worried about what the turmoil on them. not when the hoover sucks in westminster will mean for our household budgets. i'll have more shortly. up on them. not when the hoover sucks up all my labrador eats them. let's look at the front page of the metro. pictures of the two latest victims, oath of them 17 years old, jodie
5:46 am 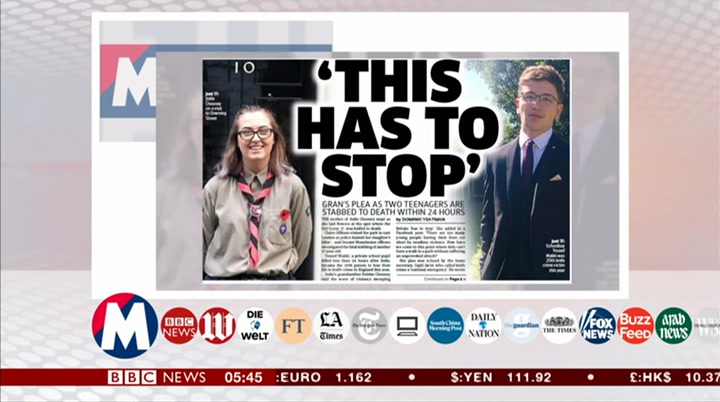 chesney and josef mackie, described asa chesney and josef mackie, described as a schoolgirl in schoolboy, both died over the weekend. it is horrendous and the metro headline is "this has to stop". it is a terribly sad story and much —— part of a much bigger sad story that has been happening in britain over the past couple of years, the spike in knife crime involving not —— younger people. i have more questions than anyone has ends is about the situation right now, because there area situation right now, because there are a lot of cities around the world paragraph will with —— that have grappled with a violent crime. there isa grappled with a violent crime. there is a lot of thinking about the best ways to do that, and it has to be a question of notjust how much money the british government can throughout this problem, but make sure that the policymakers can spend that money in the railways, to try and reduce the violence that has such a high cost. the attack on jodie is explained by herfamily as
5:47 am 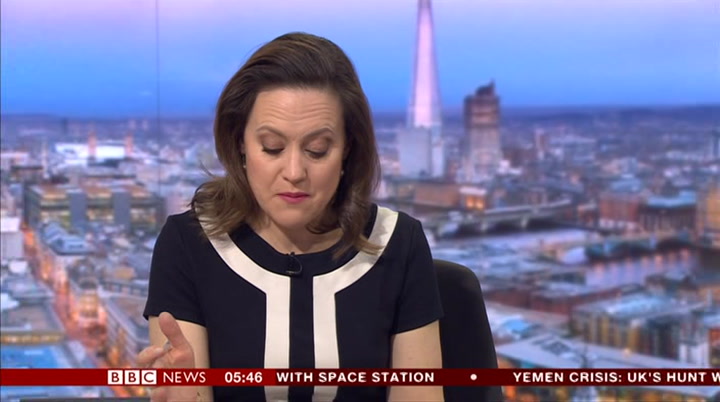 totally random, unprovoked, in a park in east london on friday. and josef mackie marks the 20th night —— knife crime victim this year. we had the home secretary is going to be calling on chief constables at a roundtable high—profile meeting today, but many are saying a lot of this is to do with the austerity we have seen and the huge cut tax in policing in recent years —— cutbacks. and this is one of the consequences of that. britain needed to get its public strand —— public spending under control after the financial crisis but it just spending under control after the financial crisis but itjust goes to show that you have to be really careful about any kind of across—the—board processor that. because there are key things that the government needs to do in providing public security is one of those. i think there is going to be a good question that needs to be asked about whether police have been getting the resources that they have needed. the home office is saying it
5:48 am 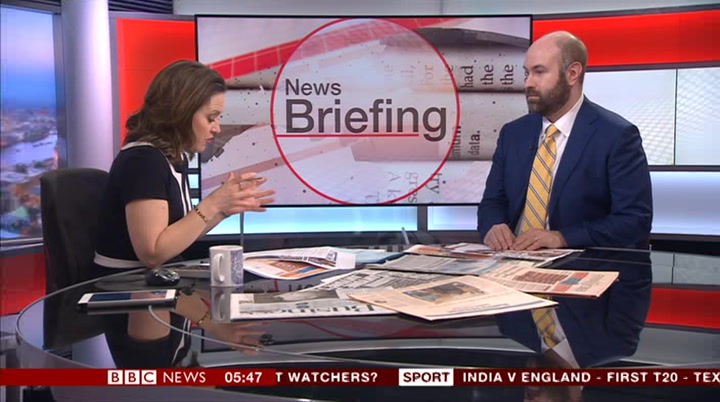 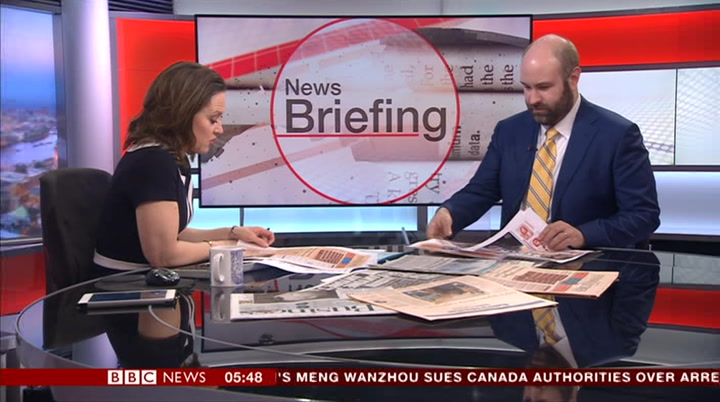 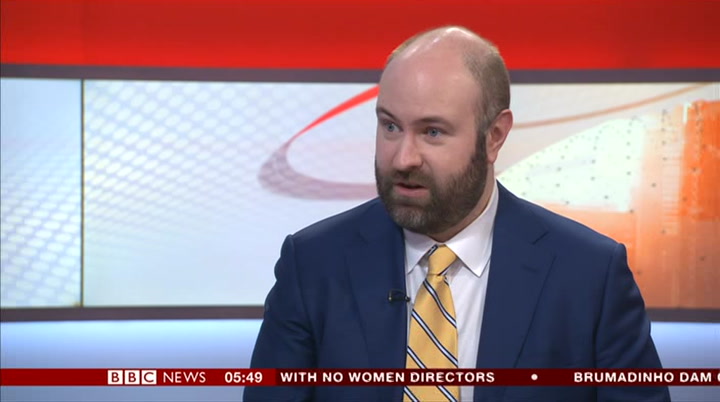 parliament to get the deal passed. and there is also the sense that if you believe a deal is better that british economy than no deal, clearly there will be revenue of occasions about as well. nothing is quite so good that the public finances as a growing economy. i think that clearly seems to be part of the argument here too. what do you make of this news coming from the chancellor today and also the government's announcement of money for areas in the north of england and the midlands that voted to leave the european union, all of this happening this week ahead of the vote on march 12. politically there is hope that the spending will get the deal across the finish line when it comes up for a second vote in parliament. either next week or some other point. but there also needs to be this broader discussion about is money the only metric for some of these issues, and should we be thinking about brexit only in terms
5:51 am 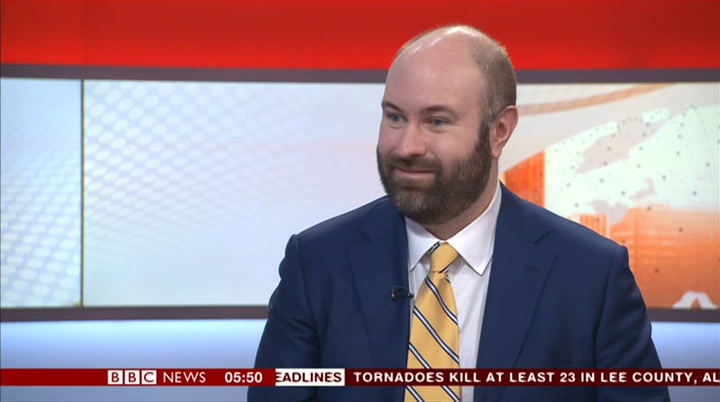 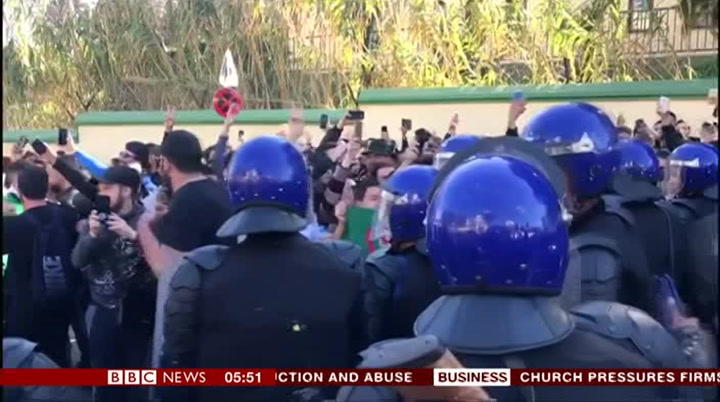 time when you would normally expect some sort of transition to start happening. especially when in the very unwell. exactly. the other point about this story is where algeria is on the map. certainly europe, since 2015 at least, has been very aware of the potential security implications of a little instability in this region, and potential impacts on migration particularly, and we are discovering that another country which had not been on the map, people had not been thinking about, is suddenly bubbling up thinking about, is suddenly bubbling up into the headlines. something to keep a close eye on. we are excited, we re keep a close eye on. we are excited, were you watching, this is nasa and spacex working together, they had a success on sunday? i think it is a terrific story, certainly the us space programme has been struggling to figure out how to deal with this
5:53 am 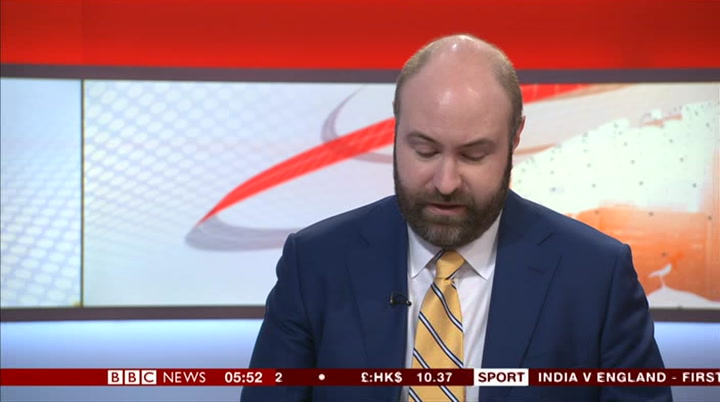 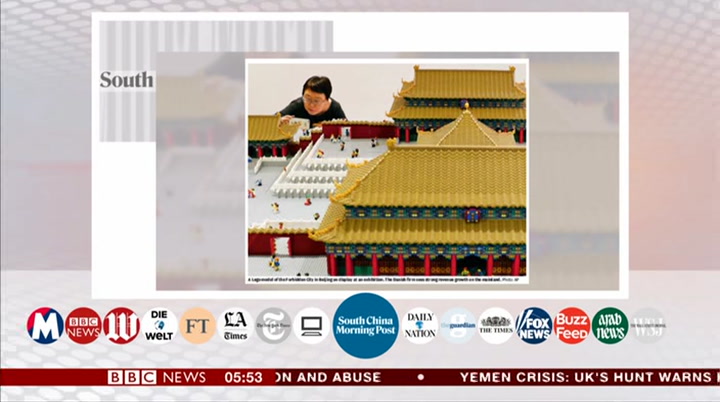 lego. it is an interesting story because it shows that even with all the turmoil and questions about chinese growth rate, companies are discovering that there is still an enormous consumer marketplace. lego is an interesting case, because they have had to deal with some intellectual property issues, dealing with the government in beijing. they have legoland in shanghai and other places, it is interesting. thank you forjoining us, and thank you to your company on the briefing. have a great day whatever you up to. hello again. we had a stormy end to the weekend.
5:55 am 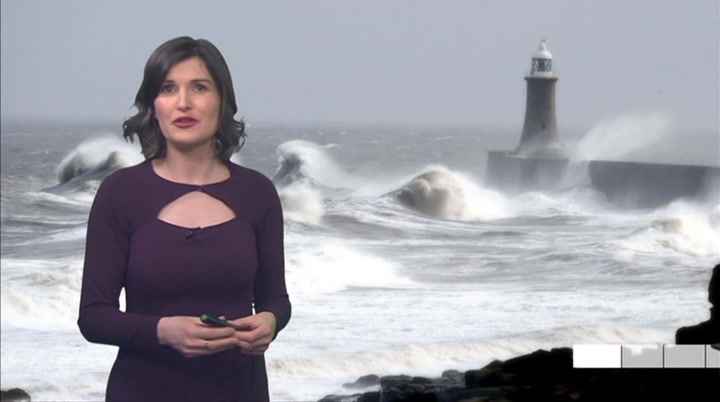 in fact, storm freya is still across our shores, so there's still the potential for the next few hours of hazardous conditions for travelling, because we've got the heavy rain, some snow, especially over the hills, but even to some lower levels, and those gales really packing a punch, perhaps some severe gales in places. this is that tell—tale area of cloud, storm freya, which is going to move out quite quickly through the early hours of monday into the north sea. but as i say, before it does clear out the way, we've still got the remnants of the rain in the south, the strong and gusty winds, very lively winds, even inland, and we've seen it fell trees as well. and then we've got that heavy rain and gale force winds driving down the north sea coast again, with some snow. and it's pretty chilly behind it, some frost for northern and western areas, so i suppose the potential is there for a little bit of iciness first thing. but otherwise, a much brighter start to monday than we had on sunday. that sunshine continues, although with it there'll be an increased risk of showers developing into the afternoon, and that will obviously temper the way things feel. but certainly plenty of showers
5:56 am 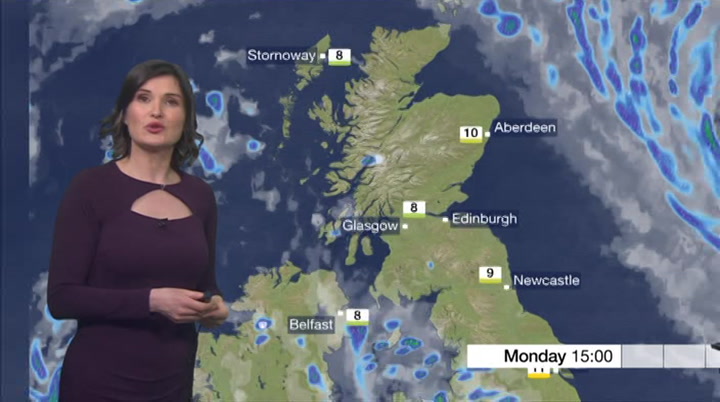 to the northern and western isles, coming into mainland scotland eventually, and into northern ireland, across england and wales. just the potential, then, that they could be wintry over the hills. there'll certainly be hail and thunder. but if you're sheltered from the breeze, in the sunshine, you'll start to feel the effect of that strengthening march sunshine. lots of showers continuing through the coming night. in fact, we could see lengthier spells of rain, hill snow too, because it is quite chilly air. so you can imagine somewhere in the countryside, sheltered, we will see a touch of frost, but fairly localised. low pressure dominates the weather as we go into tuesday. there's storm freya, well and truly off into parts of scandinavia. but, with low pressure close by, it's keeping things unsettled. there will be showers or longer spells of rain, centred across northern parts of the uk. hill snow as well. they will tend to ease in the south ahead of this next area of rain, which is our next area of low pressure. so midweek looks set to turn very much more unsettled once again, with more widespread rain or heavy showers, strong winds for a time, and yes, a more lengthy spell of snow, potentially, as it comes —
5:57 am 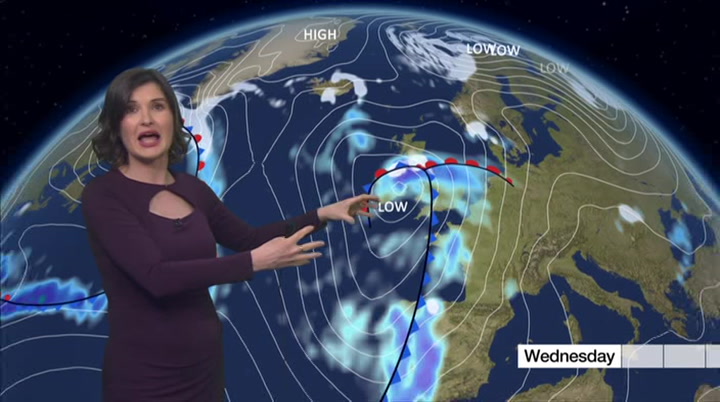 that weather system comes into that cold air across the northern half of the country. so that's something we'll keep our eye on. much milder airfollows on behind, with heavy showers, hail and thunder and gusty winds as well. so a tale of two halves, really, wednesday. so it does look much more unsettled than last week. there will be some chillier weather towards the end of the week, when it quietens down, but for the meantime, the warnings are on the website.
5:58 am 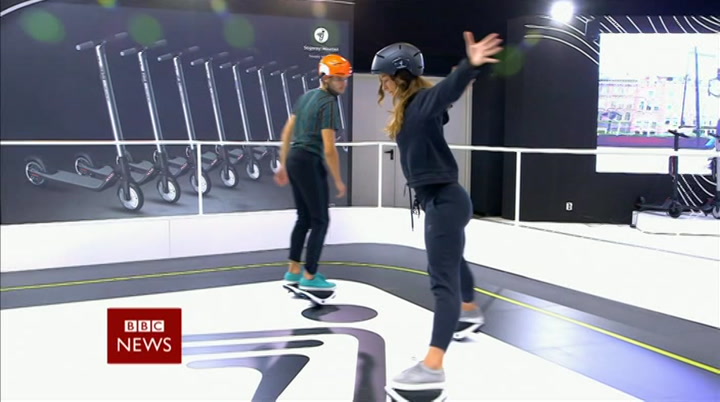 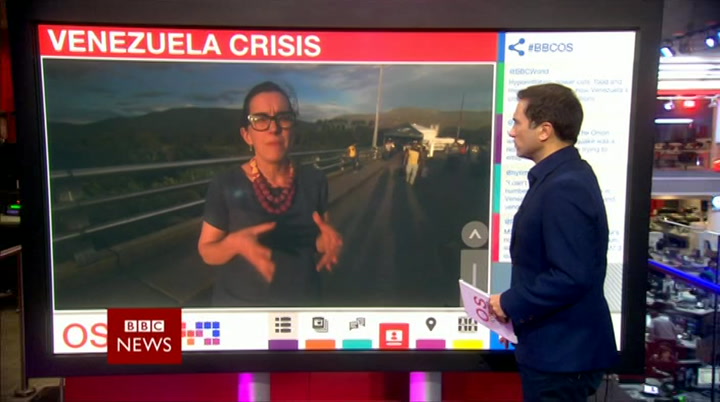 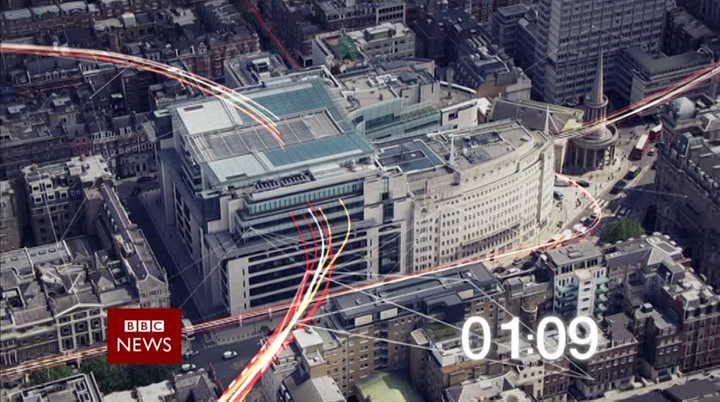 The latest headlines plus a review of the day's papers, news websites and what's trending on social media. Also in HD. [S]